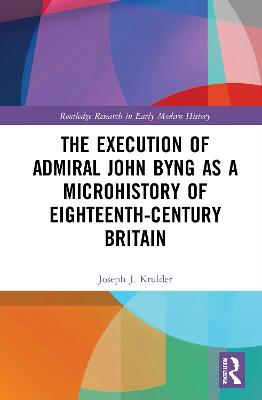 Description - The Execution of Admiral John Byng as a Microhistory of Eighteenth-Century Britain by Joseph J. Krulder

According to Voltaire's Candide, Admiral John Byng's 1757 execution went forward to 'encourage the others'. Of course, the story is more complicated. This microhistorical account upon a macro-event presents an updated, revisionist, and detailed account of a dark chapter in British naval history. Asking 'what was Britain like the moment Byng returned to Portsmouth after the Battle of Minorca (1756)?' not only returns a glimpse of mid-eighteenth century Britain but provides a deeper understanding of how a wartime admiral, the son of a peer, of some wealth, a once colonial governor, and sitting member of parliament came to be scapegoated and then executed for the failings of others. This manuscript presents a cultural, social, and political dive into Britain at the beginning of the Seven Years' War. Part 1 focuses on ballad, newspaper, and prize culture. Part 2 makes a turn towards the social where religion, morality, rioting, and disease play into the Byng saga. Admiral Byng's record during the 1755 Channel Campaign is explored, as is the Mediterranean context of the Seven Years' War, troubles elsewhere in the empire, and then the politics behind Byng's trial and execution.

Buy The Execution of Admiral John Byng as a Microhistory of Eighteenth-Century Britain by Joseph J. Krulder from Australia's Online Independent Bookstore, BooksDirect.