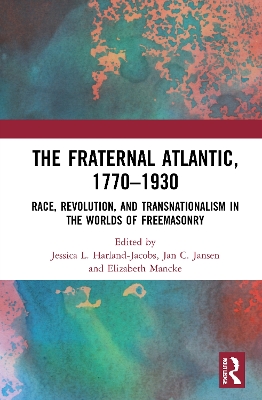 The Fraternal Atlantic, 1770-1930: Race, Revolution, and Transnationalism in the Worlds of Freemasonry

Description - The Fraternal Atlantic, 1770-1930: Race, Revolution, and Transnationalism in the Worlds of Freemasonry by Jessica L. Harland-Jacobs

This book examines Freemasonry in the eighteenth- and nineteenth-century Atlantic world. Drawing on fresh empirical evidence, the chapters position fraternalism as a critical component of Atlantic history.

Fraternalism was a key strategy for people swept up in the dislocations of imperialism, large-scale migrations, and the socio-political upheavals of revolution. Ranging from confraternities to Masonic lodges to friendly societies, fraternal organizations offered people opportunities to forge linkages across diverse and widely separated parts of the world. Using six case studies, the contributors to this volume address multiple themes of fraternal organizations: their role in revolutionary movements; their intersections with the conflictive histories of racism, slavery, and anti-slavery; their appeal for diasporic groups throughout the Atlantic world, such as revolutionary refugees, European immigrants in North America, and members of the Jewish diaspora; and the limits of fraternal "brothering" in addressing the challenges of modernity.

The chapters in this book were originally published as a special issue of Atlantic Studies: Global Currents.

Buy The Fraternal Atlantic, 1770-1930: Race, Revolution, and Transnationalism in the Worlds of Freemasonry by Jessica L. Harland-Jacobs from Australia's Online Independent Bookstore, BooksDirect.