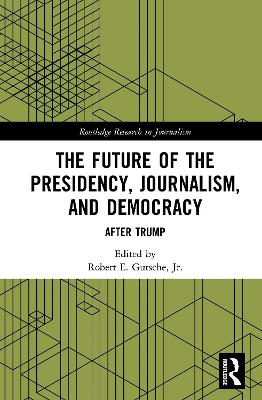 The Future of the Presidency, Journalism, and Democracy: After Trump

Description - The Future of the Presidency, Journalism, and Democracy: After Trump by Robert E. Gutsche

This volume examines the effects of Donald Trump's presidency on journalistic practices, rhetoric, and discourses. Rooted in critical theory and cultural studies, it asks what life may be like without Trump, not only for journalism but also for American society more broadly.

The book places perspectives and tensions around the Trump presidency in one spot, focusing on the underlying ideological forces in tensions around media trust, Trumpism, and the role of journalism in it all. It explores how journalists dealt with racist rhetoric from the White House, relationships between the Office of the President and social media companies, citizens, and journalists themselves, while questioning whether journalism has learned the right lessons for the future. More importantly, chapters on liberal media "bias," the First 100 Days of the Biden Presidency, gender, and race, and how journalists should adopt measures to "reduce harm" hint as to where politics and journalism may go next.

Reshaping the scholarly and public discourse about where we are headed in terms of the presidency and publics, social media, and journalism, this book will be an important resource for scholars and graduate students of journalism, media studies, communication studies, political science, race and ethnic studies and sociology.

Buy The Future of the Presidency, Journalism, and Democracy: After Trump by Robert E. Gutsche from Australia's Online Independent Bookstore, BooksDirect.

A Preview for this title is currently not available.
More Books By Robert E. Gutsche
View All