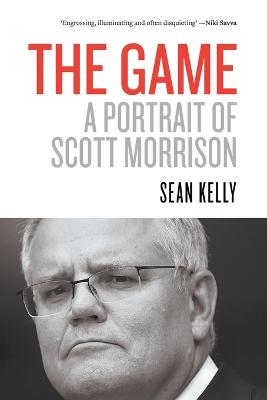 The Game: A Portrait of Scott Morrison

Description - The Game: A Portrait of Scott Morrison by Sean Kelly

What happens when the prime minister views politics only as a game?

'Engrossing, illuminating and often disquieting'-Niki Savva
'It's been almost impossible to get a handle on Scott Morrison. Until now. Sean Kelly has done it, comprehensively.' -Barrie Cassidy

What happens when the prime minister views politics as a game?

A must-read account of a man, a time and a nation.

Sean Kelly gives us the definitive portrait of Scott Morrison - a politician not quite like any other. Morrison understands that politics has become a game - one he is determined to win. He also understands something essential about Australia, something many of us are unwilling to admit, even to ourselves. But there are things Scott Morrison does not understand. This is the story of those failures, too - and of how Morrison's approach to politics has become a dangerous liability.

'Sean Kelly exposes Morrison with wit and righteous precision. After reading this insightful, funny and absolutely maddening dissection of the man, I can now clearly see him for what he is. Go Sharks!' -Tom Ballard