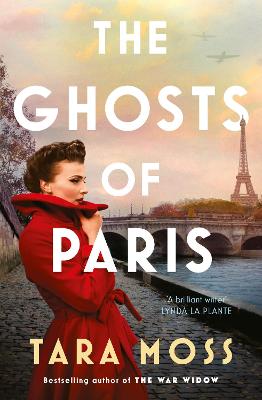 The Ghosts of Paris

Description - The Ghosts of Paris by Tara Moss

A gripping story of secrets and intrigue set in postwar London and Paris. The search for a missing husband forces investigator and former war reporter Billie Walker to face the ghosts of her own painful past, and sets her on a collision course with an underground network of Nazis ...

It's 1947. The world continues to grapple with the fallout of the Second World War, and former war reporter Billie Walker is finding her feet as an investigator. When a wealthy client hires Billie and her assistant Sam to track down her missing husband, the trail leads Billie back to London and Paris, where Billie's own painful memories also lurk. Jack Rake, Billie's wartime lover and briefly, husband, is just one of the millions people who went missing in Europe during the war. What was his fate after they left Paris together?

As Billie's search for her client's husband takes her to both the swanky bars at Paris's famous Ritz hotel and to the dank basements of the infamous Paris morgue, she'll need to keep her gun at the ready, because something even more terrible than a few painful memories might be following her around the city of lights ...

'The romance of Paris, the adrenaline rush of a deadly chase, a soul-shattering secret, and a resilient heroine make for a gripping read' Booklist

Praise for The War Widow:

'It's a cracking thriller, with a marvellous, strong, flamboyant heroine. Loved it.' Joanne Harris, award-winning author of Chocolat

'Billie Walker is a character you will cheer for' Vancouver Sun

'A cinematic and important feminist noir - dark as midnight velvet, and tough as steel. Do not miss this!' Hank Phillippi Ryan, USA Today bestselling author of The First To Lie

A Preview for this title is currently not available.
More Books By Tara Moss
View All