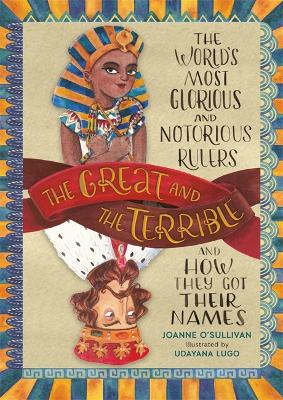 The Great and the Terrible: The World's Most Glorious and Notorious Rulers and How They Got Their Names

Description - The Great and the Terrible: The World's Most Glorious and Notorious Rulers and How They Got Their Names by Joanne O'Sullivan

We've heard of Alexander the Great. We've heard of Ivan the Terrible. But what was so Great about Alexander? What was so Terrible about Ivan? Spanning centuries of history in a culturally diverse framework-from ancient India to nineteenth-century Hawaii, and with a balanced focus on notorious women rulers as well as male, The Great and the Terrible takes a humorous look at some of the most glorious and notorious figures in history through the lens of the nicknames they're remembered by.While some of the characters mentioned here are more prominent in world history (Cyrus the Great introduced the world's first human rights charter), others are well known only within their own cultures. The Great and the Terrible gives middle-grade readers an opportunity to dip into the breadth of world history, sampling its cultural diversity and its stranger-than-fiction historical exploits, with a mix of the sensational and the serious. It helps to correct the imbalance in many history books that currently only focus on Western Civilization, shining the spotlight on achievements (and foibles) in many different cultures.The Great and the Terrible sketches portraits of each of 25 figures and their worlds, focusing on the sensational and the superlative in each of their fascinating stories.The list of rulers included are:* Alexander the Great* Hatshepsut* Cyrus the Great* Ashoka the Great* Empress Suiko* Pacal the Great* Good King Wenceslas* Sejong the Great* Askia the Great* Lorenzo the Magnificent* Sulyman the Magnificent* Nur Jahan* Good Queen Bess (Elizabeth I)* Nanyehi* Kamehameha the Great* Attila the Hun* Bad King John* Vlad the Impaler* Bloody Mary Tudor* Ivan the Terrible* Catherine De Medici* Mad Ibrahim I* Sultan Ismail the Bloodthirsty* Queen Ranavalona the Cruel* Mad King Ludwig

Buy The Great and the Terrible: The World's Most Glorious and Notorious Rulers and How They Got Their Names by Joanne O'Sullivan from Australia's Online Independent Bookstore, BooksDirect.

A Preview for this title is currently not available.
More Books By Joanne O'Sullivan
View All