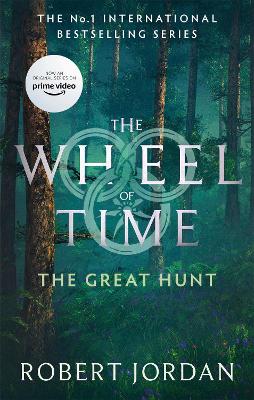 The Great Hunt: Book 2 of the Wheel of Time (Now a major TV series)

Description - The Great Hunt: Book 2 of the Wheel of Time (Now a major TV series) by Robert Jordan

NOW A MAJOR TV SERIES ON PRIME VIDEOThe second novel in the Wheel of Time series - one of the most influential and popular fantasy epics ever published.The Forsaken are loose, the Horn of Valere has been found and the Dead are rising from their dreamless sleep. The Prophecies are being fulfilled - but Rand al'Thor, the shepherd the Aes Sedai have proclaimed as the Dragon Reborn, desperately seeks to escape his destiny. Rand cannot run for ever. With every passing day the Dark One grows in strength and strives to shatter his ancient prison, to break the Wheel, to bring an end to Time and sunder the weave of the Pattern.And the Pattern demands the Dragon.'Epic in every sense' Sunday Times'With the Wheel of Time, Jordan has come to dominate the world that Tolkien began to reveal' New York Times'[The] huge ambitious Wheel of Time series helped redefine the genre' George R. R. Martin'A fantasy phenomenon' SFXThe Wheel of Time series:Book 1: The Eye of the WorldBook 2: The Great HuntBook 3: The Dragon RebornBook 4: The Shadow RisingBook 5: The Fires of HeavenBook 6: Lord of ChaosBook 7: A Crown of SwordsBook 8: The Path of DaggersBook 9: Winter's HeartBook 10: Crossroads of TwilightBook 11: Knife of DreamsBook 12: The Gathering StormBook 13: Towers of MidnightBook 14: A Memory of LightPrequel: New Spring Look out for the companion book: The World of Robert Jordan's The Wheel of Time