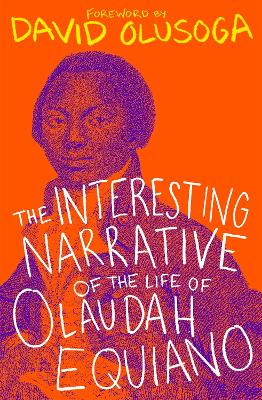 The Interesting Narrative of the Life of Olaudah Equiano: With a foreword by David Olusoga

Equiano's narrative is the most significant autobiographical account of slavery to emerge from Britain's centuries as a slave trading and slave owning power. It remains as powerful today as it was when first published in 1789. It tells the story of Equiano's remarkable life, recounting his years of slavery, working on ships that carried him across the empire and into battle during the Seven Years War, and the extraordinary story of how he was able to purchase his own freedom. Travelling to Britain as a free man Equiano settled in London and there became a leading figure in the early abolition movement.The publication of his narrative was carefully timed to coincide with the first attempt to abolish the slave trade. Describing his own experiences of slavery as both victim and witness, the book became a sensation and its author the most famous black person in Georgian Britain. In this new edition, leading historian David Olusoga sets the book in its historical context helping us to understand this complex, spiritual, politically astute and deeply passionate man. Although Equiano did not live to see the abolition of the slave trade or slavery his voice was critical to that that long campaign.

Buy The Interesting Narrative of the Life of Olaudah Equiano: With a foreword by David Olusoga by Olaudah Equiano from Australia's Online Independent Bookstore, BooksDirect.

A Preview for this title is currently not available.
More Books By Olaudah Equiano
View All

The Interesting Narrative of the Life of Olaudah Equiano, or Gustavus Vassa, the African. Written by Himself. Fourth Edition, Enlarged.
Olaudah Equiano
Paperback , Jun '10
RRP: $73.24 $65.92

Interesting Narrative of the Life of Olaudah Equiano, or Gustavus Vassa, the African Written by Himself (Dodo Press)
Olaudah Equiano
Paperback , May '07
RRP: $39.04 $35.14