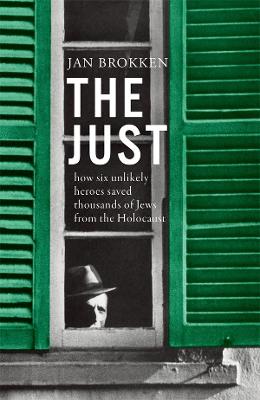 The Just: how six unlikely heroes saved thousands of Jews from the Holocaust

Description - The Just: how six unlikely heroes saved thousands of Jews from the Holocaust by Jan Brokken

The remarkable story of how a consul and his allies helped save thousands of Jews from the Holocaust in one of the greatest rescue operations of the twentieth century.

The remarkable story of how a consul and his allies helped save thousands of Jews from the Holocaust in one of the greatest rescue operations of the twentieth century.

In May 1940, Jan Zwartendijk, the director of the Lithuanian branch of the Philips electrical-goods company, stepped into history when he accepted the honorary role of Dutch consul.

In Kaunas, the capital of Lithuania, desperate Jewish refugees faced annihilation in the Holocaust. That was when Zwartendijk - with the help of Chiune Sugihara, the consul for Japan, and the Dutch ambassador in Riga, Latvia - chose to break his country's diplomatic rules. He opened up a possible route to freedom through the ruse of issuing visas to the Dutch colony of Cura ao on the other side of the world. Thanks to these visas, and Sugihara's approval of onward passage, many Jews - up to 10,000 - were able to travel on the Trans-Siberian Express all through Soviet Russia to Vladivostok, further to Japan, and onwards to China.

Most of the Jews whom Zwartendijk helped escape survived the war, and they and their descendants settled in America, Canada, Australia, and other countries. Zwartendijk and Sugihara were true heroes, and yet they were both shunned by their own countries after the war, and their courageous, unstinting actions have remained relatively unknown.

In The Just, renowned Dutch author Jan Brokken wrests this heroic story from oblivion and traces the journeys of a number of the rescued Jews. This epic narrative shows how, even in life-threatening circumstances, some people make the right choice at the right time. It is a lesson in character and courage.

'If I had known Jan Zwartendijk's story before, I would have had filmed that.'
-Steven Spielberg

'He Zwartendijk filled desperate lives with hope during a period of great darkness, and his actions will remain a beacon of decency and righteousness for generations to come.'
-Bill Clinton

'Jan Brokken has built a monument to Jan Zwartendijk ... He makes time fan out not in length but in breadth, and does so cleverly, with dozens of characters whose lives interconnect.'
-De Volkskrant

Buy The Just: how six unlikely heroes saved thousands of Jews from the Holocaust by Jan Brokken from Australia's Online Independent Bookstore, BooksDirect.

A Preview for this title is currently not available.
More Books By Jan Brokken
View All