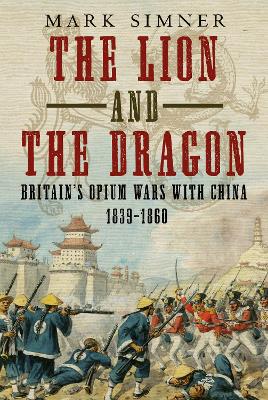 Description - The Lion and the Dragon: Britain's Opium Wars with China 1839-1860 by Mark Simner

During the middle of the 19th-Century, Britain and China would twice go to war over trade, and in particular the trade in opium. The Chinese people had progressively become addicted to the narcotic, a habit that British merchants were more than happy to feed from their opium-poppy fields in India. When the Qing dynasty rulers of China attempted to supress this trade--due to the serious social and economic problems it caused--the British Government responded with gunboat diplomacy, and conflict soon ensued. The first conflict, known as the First Anglo-Chinese War or Opium War (1839-42), ended in British victory and the Treaty of Nanking. However, this treaty was heavily biased in favour of the British, and it would not be long before there was a renewal of hostilities, taking the form of what became known as the Second Anglo-Chinese War or Arrow War (1857-60). Again, the second conflict would end with an 'unequal treaty' that was heavily biased towards the victor. 'The Lion and the Dragon: Britain's Opium Wars with China, 1839-1860' examines the causes and ensuing military history of these tragic conflicts, as well as their bitter legacies.

Buy The Lion and the Dragon: Britain's Opium Wars with China 1839-1860 by Mark Simner from Australia's Online Independent Bookstore, BooksDirect.

A Preview for this title is currently not available.
More Books By Mark Simner
View All