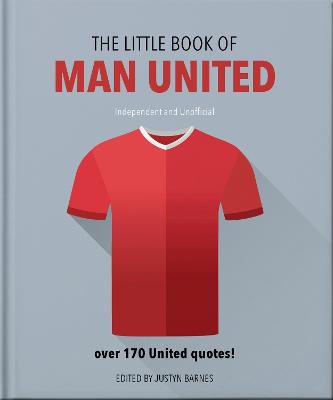 The Little Book of Man United: Over 170 United quotes

Description - The Little Book of Man United: Over 170 United quotes by Orange Hippo!

The Little Book of Man United is a collection of words of wit and wisdom by and about Manchester United's players, managers and officials past and present. Since the arrival of the Premier League, no club in England can match the Red Devils' 13 titles, two UEFA Champions League victories, the FIFA World Club Cup, six triumphs in the FA Cup, three in the League Cup and 11 in the FA Charity/Community Shield - and there was plenty more glory in the club's first 115 years too.

From Alan Hansen's falsely prophetic 'You'll never win anything with kids' to Eric Cantona's existentialist aphorism on the theme of seagulls, sardines and trawlers, the book contains more than 170 Red Devilish football quotes. Each quote is attributed to its source and, where appropriate, entries will be accompanied by explanatory asides and/or supporting statistics. Broken down into seven chapters, each one focuses on what makes being a supporter of Manchester United FC such a special experience.

A Preview for this title is currently not available.
More Books By Orange Hippo!
View All