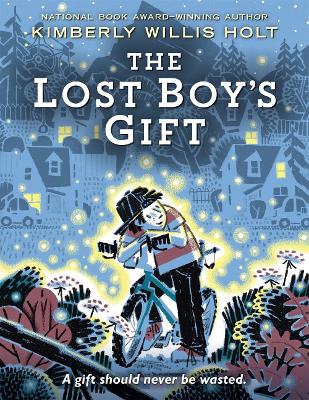 Here is a masterful novel from National Book Award-winner Kimberly Willis Holt. The story opens as ten-year-old Daniel moves across the country in the wake of his parents' divorce. He's leaving behind his dad and his friends, but taking his anger with him. Little does Daniel know what awaits on While-a-Way Lane, his quirky new neighborhood. There he meets Tilda Butter who is gifted with the ability to communicate with animals. Though Daniel's reluctant to let Tilda in at first, he ultimately opens up to a special friendship and the hope of a new start.

Kimberly Willis Holt infuses a classic coming of age tale with a magical twist, all while thoughtfully exploring themes of divorce, acceptance, intergenerational friendship, and the power that comes with listening deeply.

Other Editions - The Lost Boy's Gift by Kimberly Willis Holt A Preview for this title is currently not available.
More Books By Kimberly Willis Holt
View All