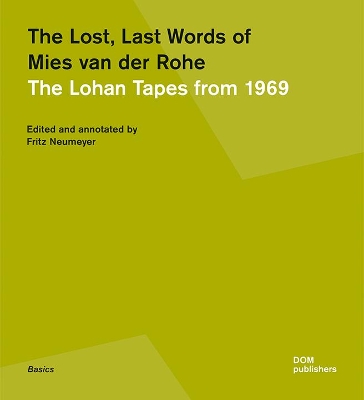 The Lost, Last Words of Mies van der Rohe: The Lohan Tapes from 1969

Presented in its entirety for the very first time, this text captures the very last words of architect Ludwig Miles van Der Rohe.

The German-American architect Dirk Lohan began to record his conversations with his grandfather Ludwig Mies van der Rohe in the summer of 1969. The tapes, recorded during the final weeks of Mies's life, captured some of the architect's very last words. They were sent to the Museum of Modern Art in New York after his death, though they went missing under unknown circumstances. Only an incomplete typescript remains as a testimony to the conversations. The Lost, Last Words of Mies van der Rohe presents this text in its entirety for the very first time. The conversations relayed in the typescript reveal the famously reticent Mies speaking about his own life with a level of detail, precision, and candour found nowhere else. They shed new light on Mies's character - not only as a serious, philosophical man but also as a human being alive to the humorous aspects of life. This book features a foreword by Dirk Lohan and an introductory essay by Fritz Neumeyer, the world's foremost scholar on Mies. Neumeyer's commentary and analysis provide keen insights into how Mies developed his architectural thinking during his early career, on his way to becoming the most important modern architects of the twentieth century.

A Preview for this title is currently not available.
More Books By Fritz Neumeyer
View All