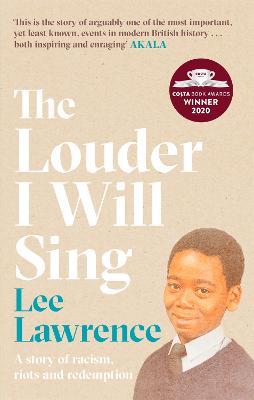 The Louder I Will Sing: A story of racism, riots and redemption: Winner of the 2020 Costa Biography Award

Description - The Louder I Will Sing: A story of racism, riots and redemption: Winner of the 2020 Costa Biography Award by Lee Lawrence

WINNER OF THE COSTA BIOGRAPHY PRIZE 2020 'This is the story of arguably one of the most important, yet least known, events in modern British history. Lee's journey and fight for justice are both inspiring and enraging' AKALA What would you do if the people you trusted to uphold the law committed a crime against you? Who would you turn to? And how long would you fight them for? On 28 September 1985, Lee Lawrence's mother Cherry Groce was wrongly shot by police during a raid on her Brixton home. The bullet shattered her spine and she never walked again. In the chaos that followed, 11-year-old Lee watched in horror as the News falsely pronounced his mother dead. In Brixton, already a powder keg because of the deep racism that the community was experiencing, it was the spark needed to trigger two days of rioting that saw buildings brought down by petrol bombs, cars torched and shops looted. But for Lee, it was a spark that lit a flame that would burn for the next 30 years as he fought to get the police to recognise their wrongdoing. His life had changed forever: he was now his mother's carer, he had seen first-hand the prejudice that existed in his country, and he was at the mercy of a society that was working against him. And yet that flame - for justice, for peace, for change - kept him going.The Louder I Will Sing is a powerful, compelling and uplifting memoir about growing up in modern Britain as a young Black man. It's a story both of people and politics, of the underlying racism beneath many of our most important institutions, but also the positive power that hope, faith and love can bring in response.

Buy The Louder I Will Sing: A story of racism, riots and redemption: Winner of the 2020 Costa Biography Award by Lee Lawrence from Australia's Online Independent Bookstore, BooksDirect.

Other Editions - The Louder I Will Sing: A story of racism, riots and redemption: Winner of the 2020 Costa Biography Award by Lee Lawrence A Preview for this title is currently not available.
More Books By Lee Lawrence
View All