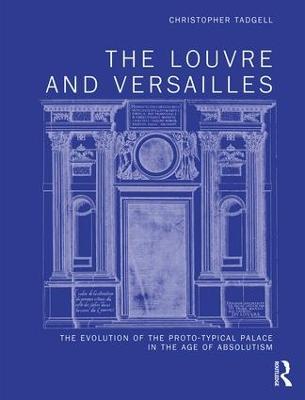 The Louvre and Versailles: The Evolution of the Proto-typical Palace in the Age of Absolutism

Description - The Louvre and Versailles: The Evolution of the Proto-typical Palace in the Age of Absolutism by Christopher Tadgel

This book traces the evolution of the great palaces of the Louvre and Versailles, from Pierre Lescot's designs for expanding the former in the mid-16th century to the successive grands projets for the transformation of the latter over the course of the 18th century. Detailed architectural analysis is set in the context of the development of the medieval monarchy towards absolutism, the significance of Hispano-Burgundian court etiquette as a formative influence on planning, and the effect of the French monarchy's financial incontinence on royal building ambitions.

On the basis of exhaustive original research, recalling contemporary testimony and re-examining the works themselves, the book challenges recent scholarly accounts of the contributions of Claude Perrault and Francois Mansart to the Louvre and demonstrates the influence of schemes by Italian masters Pietro Cortona and Bernini on Ange-Jacques Gabriel's designs for rebuilding Versailles.

Finally, the book looks at the influence of the great French palaces on those seeking to emulate their ambition, from Stockholm in the late 17th century to the deliriously opulent late 19th-century palace of Ludwig II of Bavaria at Herrenchiemsee.

The book includes a wealth of illustrative material and supporting documents, which bring this comprehensive and authoritative text to life.

Buy The Louvre and Versailles: The Evolution of the Proto-typical Palace in the Age of Absolutism by Christopher Tadgel from Australia's Online Independent Bookstore, BooksDirect.