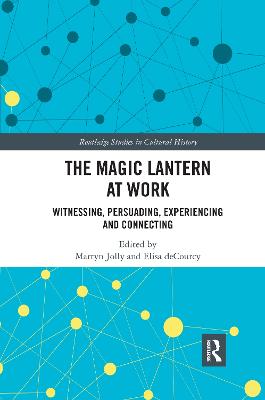 The Magic Lantern at Work: Witnessing, Persuading, Experiencing and Connecting

For centuries, various new media technologies have provided individuals with a set of powerful tools to affect their audiences. Among these the magic lantern show was perhaps the most pervasive, and persuasive. Around the world audiences gathered together in darkened rooms to see a sequence of projected images transition one into another as they listened to personal stories or scripted narrations. Through the power of the magic lantern audiences, for the first time, became the direct witnesses to distant, often traumatic, political events; they visually learned new scientific and medical knowledge, virtually experienced distant places, and collectively experienced strange, often uncanny, phenomena. Although relatively neglected until recently, the apparatus of the magic lantern is now receiving the attention it deserves from historians, curators and artists. Through a set of case studies focusing on the use of the magic lantern by very different, but equally fascinating individuals, a team of international scholars analyses the emerging power of the lantern show in the nineteenth and twentieth centuries within politics, religion, travel, science, health, marketing and entertainment. The magic lantern's connections to today's multimedia environments are explored through the intertwined themes of connecting, experiencing, witnessing and persuading.

Other Editions - The Magic Lantern at Work: Witnessing, Persuading, Experiencing and Connecting by Martyn Jolly A Preview for this title is currently not available.
More Books By Martyn Jolly
View All