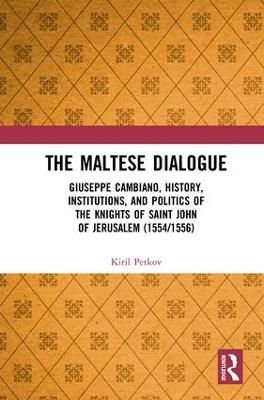 The Maltese Dialogue: Giuseppe Cambiano, History, Institutions, and Politics of the Maltese Knights 1554-1556

The Maltese Dialogue is the first comprehensive treatise of the history, institutions, and political projects of the Order of the Knights of Saint John of the Hospital, commonly known as the Maltese Order. It was written during the tenure of Grand Master Fra Claude de la Sengle (1553-1557), although the conversation between Commendator Fra Giuseppe Cambiano, one of the Order's most prominent sixteenth-century functionaries, and three Venetian patricians, on which the Dialogue is based, may have taken place even earlier.

The contents of the Dialogue fall in three categories: the opening section is the first detailed precis of the Hospitallers' history; then comes the bulk of the treatise, presenting a concise summary of the Order's constitution, institutional and legal organization, election procedures, recruitment of knights, rituals of instalment, and financial matters. The remaining section is a polemical expose arguing for the benefit of the Order's abandoning of Malta and the recapturing of Tripoli.

The Dialogue offers a hitherto unexplored, first-rate source on the Maltese knights' self-projection as a unique transnational institution of early modern Europe in the era of nation-states, on the power plays of the major political agents in the sixteenth-century Mediterranean, and on Western Christian strategies of engagement of Ottoman imperialism at the peak of its expansion in the region. Those interested in the history of Christian-Muslim interaction, the evolution of crusading practices in the era of early modern predatory warfare, and the construction of historical memory on the case study of the longest-lasting, and still extant, knightly order, will find it to be a highly intriguing and informative reading.

Other Editions - The Maltese Dialogue: Giuseppe Cambiano, History, Institutions, and Politics of the Maltese Knights 1554-1556 by Kiril Petkov 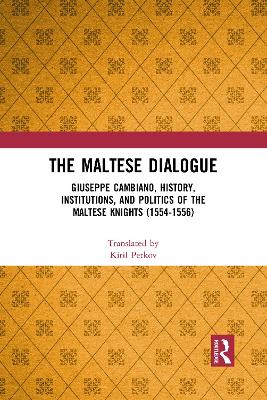 A Preview for this title is currently not available.
More Books By Kiril Petkov
View All