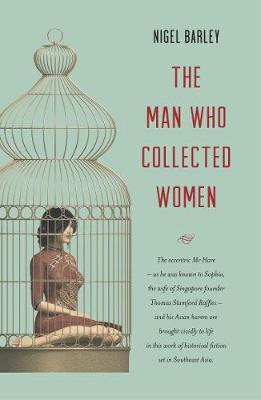 The Man who Collected Women

Description - The Man who Collected Women by Nigel Barley

The eccentric Mr Hare - as he was known to Sophia, the first wife of Singapore founder Thomas Stamford Raffles - and his Asian harem are brought vividly to life in this work of historical fiction set in Southeast Asia. Arthur Grimsby is an ageing expat in 1960s Singapore. Museum curator, ornithologist, freshly bereaved, he fears Singapore's looming independence and his redundancy and tries to complete one final piece of work: the life story of an eccentric 19th-century Englishman called Alexander Hare. Hare was a trader and slave-owner in the East and a friend of Thomas Stamford Raffles, Lieutenant Governor of Java and the founder of Singapore, but Hare's chief claim to fame is as the creator of an Asian harem, including in his collection women from Java, Bali, Sumatra, Sulawesi, Borneo, the Malay Peninsula, China, India and Africa. Hare's love of women and his assembling of a harem, initially in Borneo and then on an uninhabited atoll that would become the Cocos-Keeling Islands, made him an object of guilty male fantasies and of strident female resentments, the epitome of masculine, colonial exploitation. But Arthur Grimsby's paths are no straighter than Alexander Hare's and the two grow together as their destinies intertwine.

A Preview for this title is currently not available.
More Books By Nigel Barley
View All

Not a Hazardous Sport: Misadventures of an Anthropologist in Indonesia
Nigel Barley
Paperback , Nov '18
RRP: $34.19 $30.77