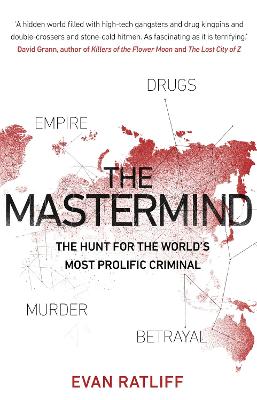 The Mastermind: The hunt for the World's most prolific criminal

Description - The Mastermind: The hunt for the World's most prolific criminal by Evan Ratliff

The extraordinary story of Paul Le Roux - one of the world's most prolific criminals, and the embodiment of a new generation of internet-enabled kingpins - and the US government's clandestine efforts to bring him down.

'Meth, murder and pirates- the coder who became a crime boss. A world that lurks just outside of our everyday perception, in the dark corners of the internet we never visit' - Wired

The Mastermind tells the incredible true story of Paul Le Roux, the frighteningly powerful creator of a twenty-first century cartel, and the decade-long global manhunt that finally brought his empire to its knees.

Le Roux's business evolved from an online prescription drug network into a sprawling multinational conglomerate engaged in almost every conceivable aspect of criminal mayhem. All tied together with encryption programs so advanced that government agencies were unable to break them.

Tracing Le Roux's vast wealth and his shadowy henchmen around the world, award-winning journalist Evan Ratliff spent four years piecing together this intricate network. His investigation reveals a dark parable of ambition and greed, and exposes a new age of crime in which a reclusive entrepreneur can build an empire in the shadows of our networked world.

Buy The Mastermind: The hunt for the World's most prolific criminal by Evan Ratliff from Australia's Online Independent Bookstore, BooksDirect.

A Preview for this title is currently not available.
More Books By Evan Ratliff
View All