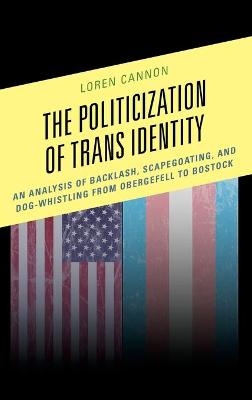 The Politicization of Trans Identity: An Analysis of Backlash, Scapegoating, and Dog-Whistling from Obergefell to Bostock

Description - The Politicization of Trans Identity: An Analysis of Backlash, Scapegoating, and Dog-Whistling from Obergefell to Bostock by Loren Cannon

Two LGBTQ affirmative US Supreme Court Rulings occurred in the second decade of the twenty-first century: the 2015 Obergefell ruling in support of same sex marriage, and the 2020 Bostock decision ruling that discrimination on the basis of sexual orientation and gender identity is prohibited by Title VII. In The Politicalization of Trans Identity: An Analysis of Backlash, Scapegoating, and Dogwhistling from Obergefell to Bostock, Loren Cannon critiques the opinions of the court in both cases. Cannon carefully presents the evidence that transgender identity itself has become politicized post Obergefell and provides a thorough consideration of the ramifications of this politicization across the nation, especially in the form of proposed legislation and violence. Cannon argues that the politicization of trans identity can rightfully be understood as a backlash response to the Obergefell decision and increased LGBTQ equality. According to Cannon, aspects of the politicization can be characterized as scapegoating and as dog whistling. This book offers unique contributions to the understanding of these ideas, including a creative application of Rene Girard's theory of scapegoating. Lastly, Cannon argues that conceptually, virtue signaling needs to be paired with dog whistling to have the political result that the whistler intends.

Buy The Politicization of Trans Identity: An Analysis of Backlash, Scapegoating, and Dog-Whistling from Obergefell to Bostock by Loren Cannon from Australia's Online Independent Bookstore, BooksDirect.