The Protection of Cultural Heritage During Armed Conflict: The Changing Paradigms

Description - The Protection of Cultural Heritage During Armed Conflict: The Changing Paradigms by Noelle Higgins

This book analyses the current legal framework seeking to protect cultural heritage during armed conflict and discusses proposed and emerging paradigms for its better protection. Cultural heritage has always been a victim of conflict, with monuments and artefacts frequently destroyed as collateral damage in wars throughout history. In addition, works of art have been viewed as booty by victors and stolen in the aftermath of conflict. However, deliberate destruction of cultural sites and items has also occurred, and the Intentional destruction of cultural heritage has been a hallmark of recent conflicts in the Middle East and North Africa, where we have witnessed unprecedented, systematic attacks on culture as a weapon of war. In Iraq, Syria, Libya, Yemen, and Mali, extremist groups such as ISIS and Ansar Dine have committed numerous acts of iconoclasm, deliberately destroying heritage sites, and looting valuable artefacts symbolic of minority cultures. This study explores how the international law framework can be fully utilised in order to tackle the destruction of cultural heritage, and analyses various paradigms which have recently been suggested for its better protection, including the Responsibility to Protect paradigm and the peace and security paradigm.

This volume will be an essential resource for scholars and practitioners in the areas of public international law, especially international humanitarian law and cultural heritage law.

Other Editions - The Protection of Cultural Heritage During Armed Conflict: The Changing Paradigms by Noelle Higgins 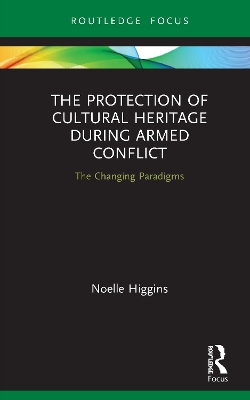 A Preview for this title is currently not available.
More Books By Noelle Higgins
View All

The Protection of Cultural Heritage During Armed Conflict: The Changing Paradigms
Noelle Higgins
Hardback , May '20
RRP: $94.99 $85.49