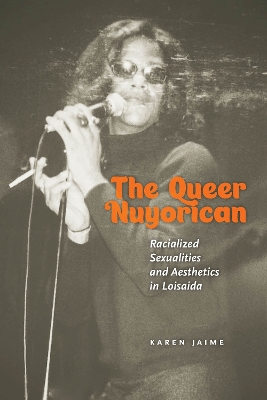 The Queer Nuyorican: Racialized Sexualities and Aesthetics in Loisaida

Description - The Queer Nuyorican: Racialized Sexualities and Aesthetics in Loisaida by Karen Jaime

A queer genealogy of the famous performance space and the nuyorican aesthetic
One could easily overlook the Nuyorican Poets Cafe, a small, unassuming performance venue on New York City's Lower East Side. Yet the space once hosted the likes of Victor Hernandez Cruz, Allen Ginsberg, and Amiri Baraka and is widely credited as the homespace for the emergent nuyorican literary and aesthetic movement of the 1990s. Founded by a group of counterculturalist Puerto Rican immigrants and artists in the 1970s, the space slowly transformed the Puerto Rican ethnic and cultural associations of the epithet "Nuyorican," as the Cafe developed into a central hub for an artistic movement encompassing queer, trans, and diasporic performance.
The Queer Nuyorican is the first queer genealogy and critical study of the historical, political, and cultural conditions under which the term "Nuyorican" shifted from a raced/ethnic identity marker to "nuyorican," an aesthetic practice. The nuyorican aesthetic recognizes and includes queer poets and performers of color whose writing and performance build upon the politics inherent in the Cafe's founding. Initially situated within the Cafe's physical space and countercultural discursive history, the nuyorican aesthetic extends beyond these gendered and ethnic boundaries, broadening the ethnic marker Nuyorican to include queer, trans, and diasporic performance modalities.
Hip-hop studies, alongside critical race, queer, literary, and performance theories, are used to document the interventions made by queer and trans artists of color-Miguel Pinero, Regie Cabico, Glam Slam participants, and Ellison Glenn/Black Cracker-whose works demonstrate how the Nuyorican Poets Cafe has operated as a queer space since its founding. In focusing on artists who began their careers as spoken word artists and slam poets at the Cafe, The Queer Nuyorican examines queer modes of circulation that are tethered to the increasing visibility, commodification, and normalization of spoken word, slam poetry, and hip-hop theater in the United States and abroad.

Other Editions - The Queer Nuyorican: Racialized Sexualities and Aesthetics in Loisaida by Karen Jaime A Preview for this title is currently not available.
More Books By Karen Jaime
View All