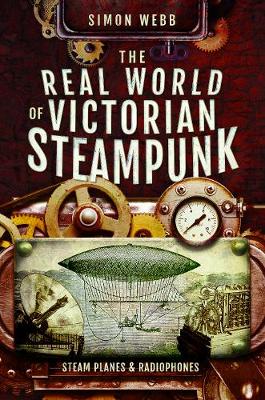 The Real World of Victorian Steampunk: Steam Planes and Radiophones

In the last few decades, steampunk has blossomed from being a rather obscure and little-known subgenre of science fiction into a striking and distinctive style of fashion, art, design and even music. It is in the written word however that steampunk has its roots and in this book Simon Webb explores and examines the real inventions which underpin the fantasy. In doing so, he reveals a world unknown to most people today. The Real World of Victorian Steampunk shows the Victorian era to have been a surprising place; one of steam-powered aeroplanes, fax machines linking Moscow and St Petersburg, steam cars travelling at over 100 mph, electric taxis and wireless telephones. It is, in short, the nineteenth century as you have never before seen it; a steampunk extravaganza of anachronistic technology and unfamiliar gadgets. Imagine Europe spanned by a mechanical internet; a telecommunication system of clattering semaphore towers capable of transmitting information across the continent in a matter of minutes. Consider too, the fact that a steam plane the size of a modern airliner took off in England in 1894. Drawing entirely on contemporary sources, we see how little-known developments in technology have been used as the basis for so many steampunk narratives. From seminal novels such as The Difference Engine, through to the steampunk fantasy of Terry Pratchett's later works, this book shows that steampunk is at least as much solid fact as it is whimsical fiction. AUTHOR: Simon Webb is the author of a number of non-fiction books, ranging from academic works on education to popular history. He works as a consultant on the subject of capital punishment to television companies and filmmakers and also writes for various magazines and newspapers; including the Times Educational Supplement, Daily Telegraph and the Guardian. 32 b/w images

A Preview for this title is currently not available.
More Books By Webb, Simon
View All