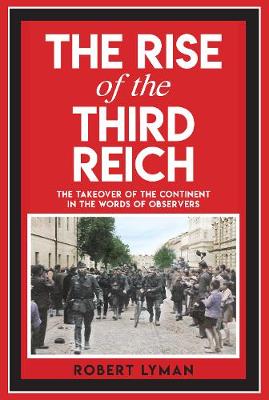 The Rise of the Third Reich: The Takeover of the Continent in the Words of Observers

Description - The Rise of the Third Reich: The Takeover of the Continent in the Words of Observers by Robert Lyman

A poignant and powerful portrait of Europe in the years between 1939 and 1941 - as the Nazi menace marches toward the greatest man-made catastrophe the world has ever experienced. The story unfolds as the war drags the whole of Europe and a reluctant United States into its violent embrace. THE RISE OF THE THIRD REICH is told from the fresh perspective of Americans caught up in the exploding European conflict as it became a world war. The narrative follows events from September 3rd 1939 - when Britain declares war - through to Pearl Harbor and American intervention in December 1941. Acclaimed British historian Robert Lyman brings together a wide range of encounters, conversations and memories, from individuals across the social spectrum, from Josephine Baker to young volunteers in the RAF - such as aces James Goodison, Art Donahue, and the wealthy playboy Billy Fiske, who flew against the Luftwaffe over ever-darkening skies of London.

Buy The Rise of the Third Reich: The Takeover of the Continent in the Words of Observers by Robert Lyman from Australia's Online Independent Bookstore, BooksDirect.

A Preview for this title is currently not available.
More Books By Robert Lyman
View All