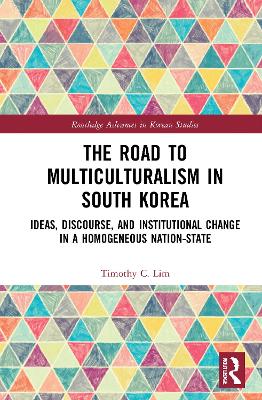 The Road to Multiculturalism in South Korea: Ideas, Discourse, and Institutional Change in a Homogenous Nation-State

Description - The Road to Multiculturalism in South Korea: Ideas, Discourse, and Institutional Change in a Homogenous Nation-State by Timothy C. Lim

This book aims to capture the complicated development of Korea from monoethnic to multicultural society, challenging the narrative of "ethnonational continuity" in Korea through a discursive institutional approach.

At a time when immigration is changing the face of South Korea and an increasingly diverse society becomes empirical fact, this doesn't necessarily mean that multiculturalism has been embraced as a normative, policy-based response to that fact. The approach here diverges from existing academic analyses, which tend to conclude that core institutions defining Korea's immigration and nationality regimes-nd which, crucially, also reflect a basic and hitherto unyielding commitment to racial and ethnic homogeneity-ill remain largely unaffected by increasing diversity. Here, this title underscores the critical importance of "discursive agency" as a necessary corrective to still dominant power and interestbased arguments. In addition, "discursive agents" are found to play a central role in communicating, promoting, and helping to instill the ideas that create a basis for change on the road to remaking Korean society.

The Road to Multiculturalism in South Korea will be of interest to students and scholars of Asian studies, immigration and migration studies, race and ethnic studies, as well as comparative politics broadly.

A Preview for this title is currently not available.
More Books By Timothy C. Lim
View All