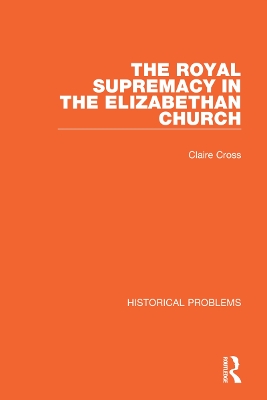 The Royal Supremacy in the Elizabethan Church

Description - The Royal Supremacy in the Elizabethan Church by Claire Cross

Originally published in 1969 this book considers the theoretical extent of the royal supremacy in the Elizabethan church and examines how far this supremacy was effective in practice. The first part considers the reactions of Catholics and of moderate and more enthusiastic Protestants, both clerical and lay, to a lay head of the English church and the second part investigates the limits of the queen's authority. The documents, which range from the formal Acts of Supremacy and Uniformity to the letters of individual gentlemen who were guiding their local congregations, reflect the discrepancy between theory and practice. No previous book of this nature tried to determine the limits of Queen Elizabeth I's powers in the localities in quite this way.

A Preview for this title is currently not available.
More Books By Claire Cross
View All