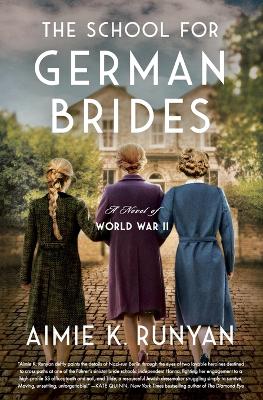 The School for German Brides: A Novel of World War II

Description - The School for German Brides: A Novel of World War II by Aimie K. Runyan


In this intriguing historical novel, a young woman who is sent to a horrific "bride school" to be molded into the perfect Nazi wife finds her life forever intertwined with a young Jewish woman about to give birth.

As the war begins, Hanna Rombauer, a young German woman, is sent to live with her aunt and uncle after her mother's death. Thrown into a life of luxury she never expected, Hanna soon finds herself unwillingly matched with an SS officer twenty years her senior. The independence that her mother lovingly fostered in her is considered highly inappropriate as the future wife of an up-and-coming officer and she is sent to a "bride school." There, in a posh villa on the outskirts of town, Hanna is taught how to be a "proper" German wife. The lessons of hatred, prejudice, and misogyny disturb her and she finds herself desperate to escape.

For Mathilde Altman, a German Jewish woman, the war has brought more devastation than she ever thought possible. Torn from her work, her family, and her new husband, she fights to keep her unborn baby safe. But when the unthinkable happens, Tilde realizes she must hide. The risk of discovery grows greater with each passing day, but she has no other options.

When Hanna discovers Tilde hiding near the school, she knows she must help her however she can. For Tilde, fear wars with desperation when Hanna proposes a risky plan.

Will they both be able to escape with their lives and if they do, what kind of future can they possibly hope for

A Preview for this title is currently not available.
More Books By Aimie K. Runyan
View All