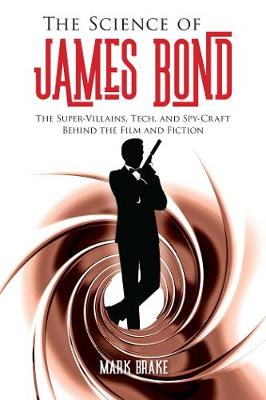 The Science of James Bond: The Super-Villains, Tech, and Spy-Craft Behind the Film and Fiction

Description - The Science of James Bond: The Super-Villains, Tech, and Spy-Craft Behind the Film and Fiction by Mark Brake

From Sean Connery to Daniel Craig, James Bond is the highest-grossing movie franchise of all time. Out-grossing Star Wars, Harry Potter, and the Marvel Cinematic Universe, the world's most iconic and international secret agent has a shelf life of almost six decades, from Dr. No to Spectre. As nuclear missile threats are replaced by a series of subtler threats in a globalised and digital world, Bond is with us still.

In The Science of James Bond, the Bond franchise is recognised as a unique genre: spy-fi. A genre of film and fiction that fuses spy fiction with science fiction. We look at Bond's obsessions with super-villains, the future, and world domination or destruction. And we take a peek under the hood of trends in science and tech, often in the form of gadgets and spy devices in chapters such as:

This is the only James Bond companion that looks at the film and fiction in such a spy-fi way, taking in weapon wizards, the chemistry of death, threads of nuclear paranoia, and Bond baddies' obsession with the master race!

Buy The Science of James Bond: The Super-Villains, Tech, and Spy-Craft Behind the Film and Fiction by Mark Brake from Australia's Online Independent Bookstore, BooksDirect.

A Preview for this title is currently not available.
More Books By Mark Brake
View All

The Science of The Big Bang Theory: What America's Favorite Sitcom Can Teach You about Physics, Flags, and the Idiosyncrasies of Scientists
Mark Brake
Paperback , Aug '19
20% OFF!
RRP: $27.99 $22.39

The Super Cool Science of Star Wars: The Saber-Swirling Science Behind the Death Star, Aliens, and Life in That Galaxy Far, Far Away!
Mark Brake
Paperback , Feb '21
RRP: $28.19 $24.81

The Super Cool Science of Harry Potter: The Spell-Binding Science Behind the Magic, Creatures, Witches, and Wizards of the Potter Universe!
Mark Brake
Paperback , Feb '21
RRP: $28.19 $24.81

The Science of Doctor Who: The Scientific Facts Behind the Time Warps and Space Travels of the Doctor
Mark Brake
Paperback , Apr '21
RRP: $32.53 $28.63