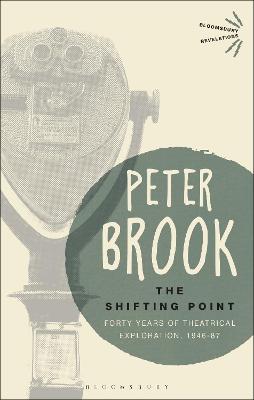 Hailed as 'the theatrical event of this century' (Sunday Times), Peter Brook's unique dramatization of India's great epic poem, The Mahabharata played to ecstatic audiences worldwide. In The Shifting Point, one of theatre's great visionaries assesses the lessons of his pioneering work from his brilliant debut at Stratford and the West End in the 1960s to the triumphant success of The Mahabharata. With the bravura and insight of a great practitioner and explorer he reveals some of the inspiration behind his extraordinary career.

Published in Bloomsbury's Revelations series, Brook's account covers many of the groundbreaking productions that cemented his reputation as 'one of the artistic geniuses of our time' (San Franciso Herald): his controversial productions of King Lear and Romeo and Juliet; the three-month period in Africa which culminated in The Conference of the Birds; Marat/Sade; filming King Lear and Lord of the Flies, and the epic The Mahabharata. With Brooks's reflections on the problems of Shakespeare and opera, and on a range of modern theatre artists including Grotowski, Gordon Craig and Samuel Beckkett, The Shifting Point provides a uniquely revealing account of 4 decades of artistic exploration.

'The great thing about Brook is that, in a medium where others provide answers, he keeps asking questions. This sage and stimulating book shows that, inside a sophisticated adult mind, lurks the intemperate curiosity of a child; which is the mark of genius.'(Michael Billington, Listener)