The Spy who was left out in the Cold: The Secret History of Agent Goleniewski

Description - The Spy who was left out in the Cold: The Secret History of Agent Goleniewski by Tim Tate

A compelling yet tragic portrait of one of the most important, yet least understood, spies of the early Cold War. This is the dramatic, untold true story of Goleniewski's dealings in espionage and skulduggery.

Spring 1958- a mysterious individual believed to be high up in the Polish secret service began passing Soviet secrets to the West.

His name was Michal Goleniewski and he remains one of the most important, least known and most misunderstood spies of the Cold War. Even his death is shrouded in mystery and he has been written out of the history of Cold War espionage - until now.

Tim Tate draws on a wealth of previously-unpublished primary source documents to tell the dramatic true story of the best spy the west ever lost and how Goleniewski exposed hundreds of KGB agents operating undercover in the West; from George Blake and the 'Portland Spy Ring', to a senior Swedish Air Force and NATO officer and a traitor inside the Israeli government. The information he produced devastated intelligence services on both sides of the Iron Curtain.

Bringing together love and loyalty, courage and treachery, betrayal, greed and, ultimately, insanity, Tim Tate tells the extraordinary true story of one of the most significant spies of the Cold War.

Acclaim for The Spy Who Was Left Out in the Cold-
'Totally gripping . . . a masterpiece. Tate lifts the lid on one of the most important and complex spies of the Cold War, who passed secrets to the West and finally unmasked traitor George Blake.'
HELEN FRY, author of MI9- A History of the Secret Service for Escape and Evasion in World War Two

'A wonderful and at times mind-boggling account of a bizarre and almost forgotten spy - right up to the time when he's living undercover in Queens, New York and claiming to be the last of the Romanoffs.'
SIMON KUPER, author of The Happy Traitor

'A highly readable and thoroughly researched account of one of the Cold War's most intriguing and tragic spy stories.' OWEN MATTHEWS, author of An Impeccable Spy

Buy The Spy who was left out in the Cold: The Secret History of Agent Goleniewski by Tim Tate from Australia's Online Independent Bookstore, BooksDirect.

Other Editions - The Spy who was left out in the Cold: The Secret History of Agent Goleniewski by Tim Tate 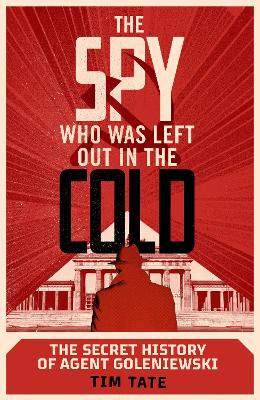 A Preview for this title is currently not available.
More Books By Tim Tate
View All