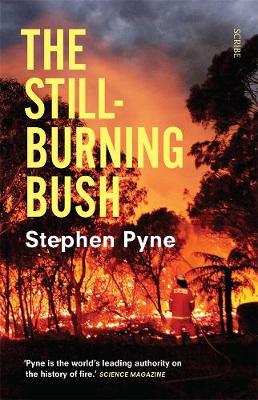 Long a fire continent, Australia now finds itself at the leading edge of a fire epoch.

Long a fire continent, Australia now finds itself at the leading edge of a fire epoch.

Australia is one of the world's fire powers. It not only has regular bushfires, but in no other country has fire made such an impact on the national culture. Over the past two decades, bushfires have reasserted themselves as an environmental, social, and political presence. And now they dominate the national conversation.

The Still-Burning Bush traces the ecological and social significance of the use of fire to shape the environment through Australian history, beginning with Aboriginal usage, and the subsequent passing of the firestick to rural colonists and then to foresters, to ecologists, and back to Indigenes. Each transfer kindled public debate not only over suitable fire practices but also about how Australians should live on the land. The 2009 Black Saturday bushfires and the 2019-2020 season have heightened the sense of urgency behind this discussion.

In its original 2006 edition, The Still-Burning Bush concluded with the aftershocks of the 2003 bushfires. A new preface and epilogue updates the narrative, including the global changes that are affecting Australia. Especially pertinent is the concept of a Pyrocene - the idea that humanity's cumulative fire practices are fashioning the fire equivalent of an ice age.

'No-one has quite synthesised the questions of fire, science, history and society in Australia as Stephen Pyne has done ... Stephen Pyne, at his best, is - if not a poet - a beautiful writer. His prose has clarity and passion, filled with knowledge and understanding of a subject that has consumed much of his attention since the first of his 15 summers as a seasonal firefighter.'
-John Schauble, History Australia

' An eloquent and provocative book'.
-Simon Caterson, The Age

'An elegant and passionate contribution to a conversation that's often caught in spin, agendas, fear.'
-Ashley Hay, The Bulletin

A Preview for this title is currently not available.
More Books By Stephen Pyne
View All