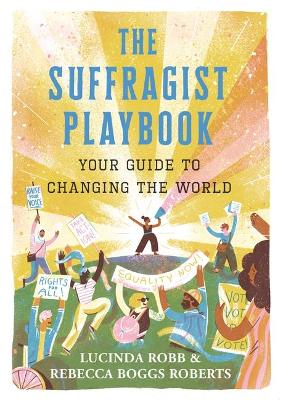 The Suffragist Playbook: Your Guide to Changing the World

Description - The Suffragist Playbook: Your Guide to Changing the World by Lucinda Robb

Do you have a cause you're passionate about? Take a few tips from the suffragists, who led one of the largest and longest movements in American history.

The women's suffrage movement was decades in the making and came with many harsh setbacks. But it resulted in a permanent victory: women's right to vote. How did the suffragists do it? One hundred years later, an eye-opening look at their playbook shows that some of their strategies seem oddly familiar. Women's marches at inauguration time? Check. Publicity stunts, optics, and influencers? They practically invented them. Petitions, lobbying, speeches, raising money, and writing articles? All of that, too.

From moments of inspiration to some of the movement's darker aspects-including the racism of some suffragist leaders, violence against picketers, and hunger strikes in jail-this International Literacy Association Young Adult Book Award winner takes a clear-eyed view of the role of key figures: Susan B. Anthony, Lucy Stone, Sojourner Truth, Elizabeth Cady Stanton, Frances Willard, Ida B. Wells, Alice Paul, and many more. Engagingly narrated by Lucinda Robb and Rebecca Boggs Roberts, whose friendship goes back generations (to their grandmothers, Lady Bird Johnson and Lindy Boggs, and their mothers, Lynda Robb and Cokie Roberts), this unique melding of seminal history and smart tactics is sure to capture the attention of activists-in-the-making today.

Buy The Suffragist Playbook: Your Guide to Changing the World by Lucinda Robb from Australia's Online Independent Bookstore, BooksDirect.