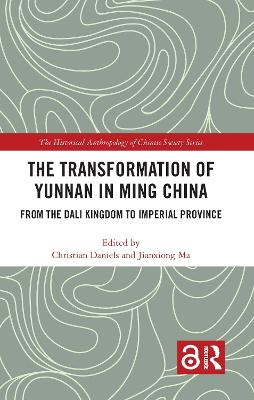 The Transformation of Yunnan in Ming China: From the Dali Kingdom to Imperial Province

Description - The Transformation of Yunnan in Ming China: From the Dali Kingdom to Imperial Province by Christian Daniels

This book examines how the Ming state transformed the multi-ethnic society of Yunnan into a province. Yunnan had remained outside the ambit of central government when ruled by the Dali kingdom, 937-1253, and its foundation as a province by the Yuan regime in 1276 did not disrupt Dali kingdom style political, social and religious institutions. It was the Ming state in the fourteenth to seventeenth centuries through its institutions for military and civilian control which brought about profound changes and truly transformed local society into a province. In contrast to other studies which have portrayed Yunnan as a non-Han frontier region waiting to be colonised, this book, by focusing on changes in local society, casts off the idea of Yunnan as a border area far from civilisation.

Buy The Transformation of Yunnan in Ming China: From the Dali Kingdom to Imperial Province by Christian Daniels from Australia's Online Independent Bookstore, BooksDirect.

A Preview for this title is currently not available.
More Books By Christian Daniels
View All