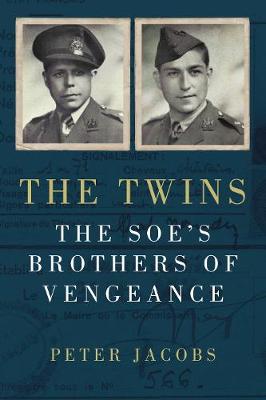 The Twins: The SOE's Brothers of Vengeance

Description - The Twins: The SOE's Brothers of Vengeance by Peter Jacobs

After having set up one of the first underground organisations in France, being captured and escaping over the Pyranees into Spain, brothers Henry and Alfred Newton were delivered the devastating news that the mercy ship carrying their entire families - parents, wives, children - had been torpedoed and sunk by a Nazi U-boat with the loss of all aboard. From that moment on, the Newton brothers were consumed with a passion for revenge. Recruited by SOE, and known to everyone simply as The Twins, they returned to France with SOE and waged their own personal war against the Nazis. For eighteen months they lived on the edge before they were betrayed, and the net finally closed. They were caught by the Gestapo and brutally tortured at the hands of Klaus Barbie, the Butcher of Lyons, before being taken to the notorious Fresnes Prison and eventually to the dreaded Buchenwald camp. Somehow, they survived the horrors until liberated at the end of the war. For the first time in over sixty years, Peter Jacobs reveals the dramatic, harrowing tale of two brothers driven by courage steeped in vengeance. AUTHOR: Peter Jacobs served in the RAF for over thirty-six years, retiring from the service as a wing commander. He has now written several books, including The RAF in 100 Objects (THP, 2017), Codenamed Dorset (Frontline Books, 2014) and Setting France Ablaze (Pen & Sword, 2015). He lives in Lincoln. 30 b/w illustrations

A Preview for this title is currently not available.
More Books By Peter Jacobs
View All