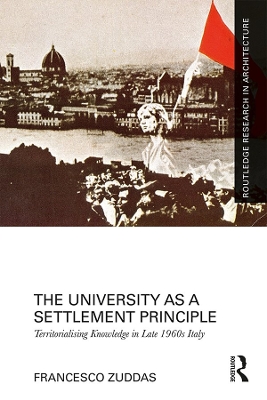 The University as a Settlement Principle: Territorialising Knowledge in Late 1960s Italy

Description - The University as a Settlement Principle: Territorialising Knowledge in Late 1960s Italy by Francesco Zuddas

The 1960s and the 1970s marked a generational shift in architectural discourse at a time when the revolts inside universities condemned the academic institution as a major force behind the perpetuation of a controlling society. Focusing on the crisis and reform of higher education in Italy, The University as a Settlement Principle investigates how university design became a lens for architects to interpret a complex historical moment that was marked by the construction of an unprecedented number of new campuses worldwide.

Implicitly drawing parallels with the contemporary condition of the university under a regime of knowledge commodification, it reviews the vision proposed by architects such as Vittorio Gregotti, Giuseppe Samona, Archizoom, Giancarlo De Carlo, and Guido Canella, among others, to challenge the university as a bureaucratic and self-contained entity, and defend, instead, the role of higher education as an agent for restructuring vast territories. Through their projects, the book discusses a most fertile and heroic moment of Italian architectural discourse and argues for a reconsideration of architecture's obligation to question the status quo.

This work will be of interest to postgraduate researchers and academics in architectural theory and history, campus design, planning theory, and history.

Other Editions - The University as a Settlement Principle: Territorialising Knowledge in Late 1960s Italy by Francesco Zuddas 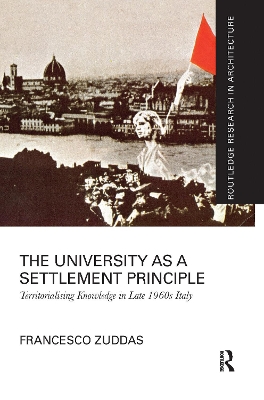 A Preview for this title is currently not available.
More Books By Francesco Zuddas
View All