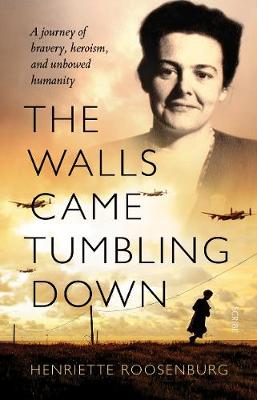 The Walls Came Tumbling Down

Description - The Walls Came Tumbling Down by Henriette Roosenburg

How do you start a journey when the roads are blocked? Who can you trust in a country where the Nazi regime has only just fallen?

How do you start a journey when the roads are blocked? Who can you trust in a country where the Nazi regime has only just fallen?

'This is the story of the liberation of four Dutch political prisoners at the end of World War II, and about their trek home to Holland . . . ' So, modestly, begins this firsthand account of the adventures of three women and one man in the hellish aftermath of the war in Europe. Awakened from the nightmare of prison camp, freed from the fear of the firing squad that had haunted each of them since capture, the four compatriots find that they must still navigate horror itself without food, without papers, without funds. Virtues are all that remain in their possession, and it is these - nobility, friendship, honour, strength, pride in their bloody but unbowed humanity - that guide them home. This is a tale of bravery that will make you care deeply about its protagonists, and weep tears of wonder at their heroism.

'Gripping and beautiful, Roosenburg's memoir is a tale of bravery that will make you care deeply about its protagonists, even make you weep at their ordeal and homecoming. It is one of the unjustly neglected gems of Second World War literature.'
-James Mustich, author of 1,000 Books To Read Before You Die

'I wept - tears of pride - while reading Henriette Roosenburg's The Walls Came Tumbling Down. Pride? Yes, pride that human beings can rise to such heights.'
-Noel Perrin, Los Angeles Times

'Scribe has done readers a great service by reprinting the unjustly forgotten The Walls Came Tumbling Down by Henriette Roosenburg, nicknamed 'Zip' for the frequency with which she once secretly criss-crossed Nazi-held borders, narrates the incredible events that follow her liberation from a German prison by the Soviet military with casual simplicity and a touch of humour ... A moving, often funny book, despite the circumstances, told by a brave and truly remarkable woman who deserves to be remembered.'
-Hank Stephenson, Shelf Awareness