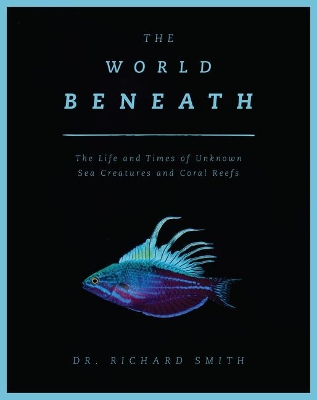 The World Beneath: The Life and Times of Unknown Sea Creatures and Coral Reefs

Description - The World Beneath: The Life and Times of Unknown Sea Creatures and Coral Reefs by Richard Smith

Meet the world's most fascinating sea creatures-see the lives and curiosities of colourful fish and coral reefs-this spectacular volume has more than 300 color photos and extraordinary text from a leading marine biologist and underwater photographer, and an international expert on seahorses.

In this richly informative volume, brimming with new discoveries and more than three hundred colourful images of jaw-dropping fish and coral reefs, you'll swim in the Atlantic, Pacific, and Indian Oceans; you'll be dazzled in the Coral Triangle and amazed in Triton Bay. Up close you'll meet the Cenderawasih fairy wrasse, with its florescent yellow streak; the polka-dot longnose filefish; and the multicolored seadragon. There are scarlet-colored corals, baby-blue sponges, daffodil crinoids, and all sorts of mystifying creatures that change colour at the drop of a hat. The whale shark is almost larger than life and the author's beloved pygmy seahorse, unless photographed, is almost too tiny to see.

The wondrous creatures inside are charmers and tricksters and excel in the arts of seduction and deception, and you'll have the rare chance to see and delight in their antics. You'll also learn what they eat, how they play, and how they care for one another, live on one another, and mimic others when they're afraid. There is also compelling insight into the naming process, which sea creatures are facing extinction, and how we can help them before it's too late.

'Packed with vibrant images of sea life large and small, scientist and photographer Smith's volume is a splendid and thorough look beneath the surface of the ocean.' - Publishers Weekly


Buy The World Beneath: The Life and Times of Unknown Sea Creatures and Coral Reefs by Richard Smith from Australia's Online Independent Bookstore, BooksDirect.

A Preview for this title is currently not available.
More Books By Richard Smith
View All