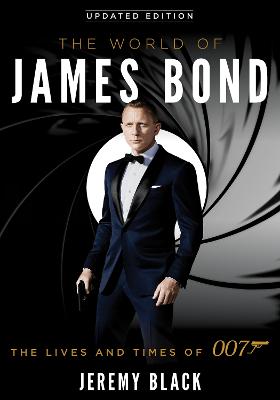 The World of James Bond: The Lives and Times of 007

Description - The World of James Bond: The Lives and Times of 007 by Jeremy Black

The most current and insightful look at the politics and culture of the Bond world as the last Daniel Craig movie hits theaters.

This book presents an insightful and thoroughly entertaining exploration of the political context of the Bond books and films. Jeremy Black offers a historian's interpretation from the perspective of 2020 and the latest Bond film, assessing James Bond in terms of the greatly changing world order of the Bond years-a lifetime that stretches from 1953, when the first novel appeared, to the present. Black argues that the Bond novels-the Fleming books as well as the often-neglected novels authored by others after Fleming died in 1964-and films drew on current fears in order to reduce the implausibility of the villains and their villainy.

The novels and films also presented potent images of national character, explored the rapidly changing relationship between a declining Britain and an ascendant United States, charted the course of the Cold War and the subsequent post-1990 world, and offered an evolving but always potent demonology. Bond was, and still is, an important aspect of post-World War II popular culture throughout the Western world. This was particularly so after Hollywood launched the filmic Bond, thus making him not only a character designed for the American film market but also a world product and a figure of globalization. Class, place, gender, violence, sex, race-all are themes that Black scrutinizes through the ongoing shifts in characterization and plot. His well-informed and well-argued analysis provides a fascinating history of the enduring and evolving appeal of James Bond.

This updated edition explores new developments in the Daniel Craig years, looks to the post-Craig years, and considers the cultural significance of Bond in the modern world.

Buy The World of James Bond: The Lives and Times of 007 by Jeremy Black from Australia's Online Independent Bookstore, BooksDirect.

Other Editions - The World of James Bond: The Lives and Times of 007 by Jeremy Black A Preview for this title is currently not available.
More Books By Jeremy Black
View All