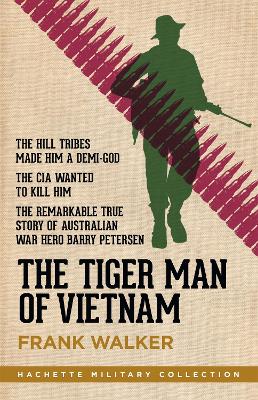 The Tiger Man of Vietnam

Description - The Tiger Man of Vietnam by Frank Walker

'This book drips with adventure and intrigue'THE AGEIn 1963, Australian Army Captain Barry Petersen was sent to Vietnam. It was one of the most tightly held secrets of the Vietnam War. Petersen was ordered to train and lead guerrilla squads of Montagnard tribesmen against the Viet Cong in the remote Central Highlands. He successfully formed a fearsome militia, named 'Tiger Men'.A canny leader, he was courageous in battle, and his bravery saw him awarded the coveted Military Cross and worshipped by the hill tribes. But his success created enemies, not just within the Viet Cong. Some in US intelligence saw Petersen as having 'gone native' and were determined he had to go, by any means possible. He was lucky to make it out of the mountains alive.THE TIGER MAN OF VIETNAM reveals the compelling true story of a little-known Australian war hero. Now part of the HACHETTE MILITARY COLLECTION.

A Preview for this title is currently not available.
More Books By Frank Walker
View All