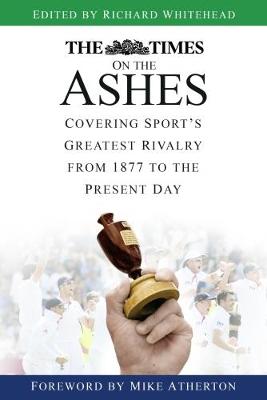 The Times on the Ashes

Covering Sport's Greatest Rivalry from 1877 to the Present Day

Description - The Times on the Ashes by Richard Whitehead

England against Australia for the Ashes it is one of the oldest and greatest rivalries in sport and almost its entire history has been covered in The Times. From Shane Warne's ball of the century in 1993 to Gilbert Jessop's power-crazed hitting at The Oval in 1902; from the infamous Bodyline tour of 1932-33 to England's surrender to the pace of Lillee and Thomson in 1974- 75; from Len Hutton's Coronation year triumph in 1953 to the long years of defeat before the Ashes were finally recaptured in 2005. The Times at the Ashes showcases the great batsmen Bradman, Hutton, Ponting, Gower, Trumper, Boycott, Greg Chappell; the great bowlers Trueman, Warne, Larwood, Lillee, Underwood, McGrath, Anderson and the great captains Brearley, Ian Chappell, Vaughan, Armstrong, Jardine, Steve Waugh, Hutton. This unique book also recaptures more than a century of the highs and lows of Ashes cricket through the pages of The Times and features some of the greatest writers in the history of cricket John Woodcock, Christopher Martin-Jenkins, Alan Lee, Gideon Haigh and Mike Atherton to name just a few. AUTHOR: Richard Whitehead is the deputy obituaries editor of The Times and has worked on the paper for nineteen years in a number of departments. Previous roles include assistant sports editor and deputy books editor. He has worked on a large number of Times archive supplements and edited many one-off magazines and supplements. He is also the obituaries editor of Wisden Cricketers' Almanack and a regular book reviewer for The Cricketer magazine. 32 colour illustrations

Buy The Times on the Ashes by Richard Whitehead from Australia's Online Independent Bookstore, BooksDirect.

A Preview for this title is currently not available.
More Books By Richard Whitehead
View All

Why Tyrannosaurus But Not If? US/Can edition: The Dyslexic Blueprint for the Future of Education
Richard N Whitehead
Paperback , Jul '17
RRP: $37.06 $33.35