To War With the Walkers: One Family's Extraordinary Story of the Second World War

Description - To War With the Walkers: One Family's Extraordinary Story of the Second World War by Annabel Venning

**DAILY MAIL BOOKS OF THE YEAR 2019****SUNDAY TELEGRAPH CHRISTMAS BOOKS OF THE YEAR 2019**'So blissfully good that I'd give it to a reader of any age . . . deeply touching, unforgettable family memoir'ALLISON PEARSON, SUNDAY TELEGRAPH'Uplifting and enlightening . . . Venning has a good eye for what makes the Walker story both unique and universal . . . Thrilling'MAIL ON SUNDAY'Superb . . . With its sweeping narrative, readable style, sense of humanity and breadth of research, the saga casts a highly personal light on some of the most significant episodes of [the Second World War]'DAILY EXPRESS'A heart-pounding narrative that feels fresh . . . this marvellous book also depicts a world that was soon to vanish'DAILY MAIL'A moving book . . . This account of one family's experience takes us to hidden crannies of the war that more official accounts might not bother with . . . Once read, never forgotten'THE TIMES'A sensationally good book . . . I see reflections of my own family, and beyond them, like those mirrors tilted slightly into infinity, I can see literally miles of others lined up, inexorably linked forever by a shared experience . . . this is an exceptional book and should be required reading in modern history classes'JOANNA LUMLEY'An extraordinary, compelling picture of a family entwined in the Second World War . . . at turns funny, sad, redemptive and tragic. Fabulous'JAMES HOLLAND'A loving tribute . . . Brimming with anecdote and rich in fascinating detail'KEGGIE CAREWHow would it feel if all your sons and daughters were caught up in war?What would it be like to spend six years fearing what a telegram might bring?That was the heart-wrenching reality faced by so many families throughout the Second World War, including the parents of the Walker children. From the Blitz to the battlefields of Europe and the Far East, this is the remarkable story of four brothers and two sisters who were swept along by the momentous events of the war. Harold was a surgeon in a London hospital alongside his sister Ruth, a nurse, when the bombs began to fall in 1940. Peter was captured in the fall of Singapore. Edward fought the Germans in Italy, and Walter the Japanese in Burma, while in London, glamorous Bee hoped for lasting happiness with an American airman. In TO WAR WITH THE WALKERS, Annabel Venning, Walter's granddaughter, tells the enthralling and moving tales of her relatives, six ordinary young men and women, who each faced an extraordinary struggle for survival.

Buy To War With the Walkers: One Family's Extraordinary Story of the Second World War by Annabel Venning from Australia's Online Independent Bookstore, BooksDirect.

Other Editions - To War With the Walkers: One Family's Extraordinary Story of the Second World War by Annabel Venning 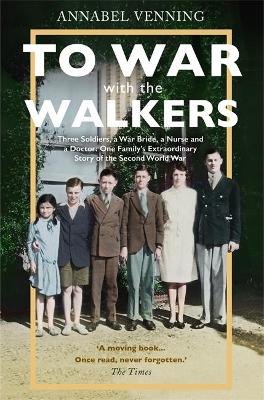 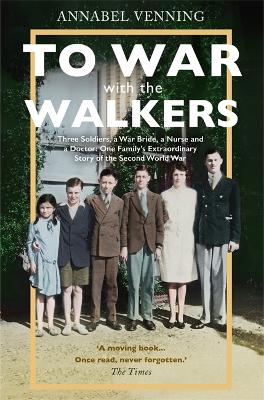 A Preview for this title is currently not available.
More Books By Annabel Venning
View All