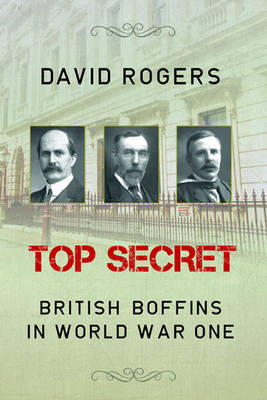 British Boffins in World War One

The early years of the 20th Century saw many advances in technology, for example aeroplanes were taking to the skies and wireless telegraphy becoming more widely available. There were also new war machines such as submarines and tanks. Additionally, pharmaceutical drugs and photographic components previously supplied from German manufacturers were no longer available during the Great War of 1914-18. Responding to some of the technical challenges, the Council of the Royal Society formed a War Committee, which in turn commissioned sub-committees concerned with chemistry, physics and engineering. Later, sub-committees relating to food, grain pests and the use of natural products were also initiated. For its part the Government formed the Admiralty Board of Invention and Research, the Munitions Invention Department, the Chemical Advisory Committee and others. Fellows of the Royal Society were key to both the Royal Society and Government initiatives. But who were the Fellows and why should they be of such strategic importance? Fellowship of the Royal Society is restricted, and requires individuals to be at the peak of their chosen scientific professions. All Fellows are experts in their chosen fields, which not only includes the traditional sciences, but also engineering and medicine. They are individuals whose scientific acumen, knowledge and skills are vital to solving seemingly intractable problems. It is no wonder that their expertise, opinions and help were sought during the dark days of the Great War. Remarkably, the exploits of the Fellows during the war are relatively unknown. Drawing from previously unpublished documents from the Royal Society archives deemed 'Secret' at the time, and wartime documents from the National Archives classified during the Great War as 'Subject to the Official Secrets Act', Top Secret: British Boffins in World War One brings a unique perspective on wartime inventions, research and developments from one of the darkest periods of 20th Century warfare. There are some remarkable examples of co-operation and effort often to tight deadlines using the utmost discretion. Some names may be familiar to you, some may not. All played their part, this is their story....

A Preview for this title is currently not available.
More Books By David Rogers
View All