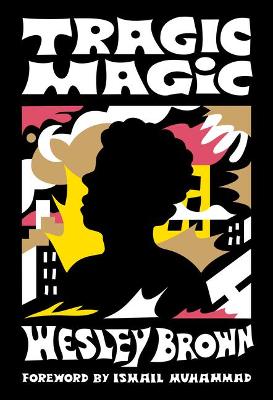 Tragic Magic is the story of Melvin Ellington, a.k.a. Mouth, a black, twenty-something, ex-college radical who has just been released from a five-year prison stretch after being a conscientious objector to the Vietnam War. Brown structures this first-person tale around Ellington's first day on the outside. Although hungry for freedom and desperate for female companionship, Ellington is haunted by a past that drives him to make sense of those choices leading up to this day.

Through a filmic series of flashbacks the novel revisits Ellington's prison experiences, where he is forced to play the unwilling patsy to the predatorial Chilly and the callow pupil of the not-so-predatorial Hardknocks; then dips further back to Ellington's college days where again he takes second stage to the hypnotic militarism of the Black Pantheresque Theo, whose antiwar politics incite the impressionable narrator to oppose his parents and to choose imprisonment over conscription; and finally back to his earliest high school days where we meet in Otis the presumed archetype of Ellington's 'tragic magic' relationships with magnetic but dangerous avatars of black masculinity in crisis. But the effect of the novel cannot be conveyed through plot recapitulation alone, for its style is perhaps even more provoking than its subject.

Originally published in 1978, and edited by Toni Morrison during her time at Random House, this Of the Diaspora edition of Tragic Magic features a new introduction by author Wesley Brown.

'Tragic Magic is a tremendous affirmation...One hell of a writer.' - James Baldwin

A Preview for this title is currently not available.
More Books By Wesley Brown
View All