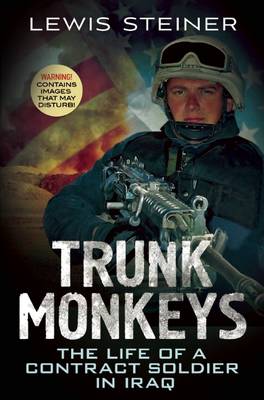 The Life of a Contract Soldier in Iraq

Trunk Monkeys: The Life of a Contract Soldier in Iraq tells the true story of operators from a private military contractor working in Iraq shortly after the Gulf War. From the perspective of grizzled veteran Lewis Steiner who had left the British Army to join the gold rush in the living hell that was war-torn Iraq, Steiner grew disillusioned about the declining situation in the country as he believed that the joint US and UK invasion had made things far worse. This fascinating and often extremely violent book encompasses the highs and lows of operating throughout the country from Basra in the south up to Mosul in the north. Steiner recounts of friends lost due to negligence and poor planning to the realities of conducting a private war surrounded by civilians who might be the enemy. Ultimately injured in an incident that left two dead, Steiner decides to soldier on due to a misguided sense of duty. Armed with his belt-fed SAW machine gun, Steiner accepted a contract located near Tikrit. The missions rapidly become a death sentence to many of the contract soldiers and dogs of war. In some cases, these missions were pointless, costing men, vehicles and the sanity of brothers in arms. Steiner was in the thick of it from dodging enemy ambushes to taking out a suicide bomber and narrowly escaping death in 'Sniper Alley' collecting cranberry sauce for the US forces on Thanksgiving Day. With the pedal to the metal, his Humvee attracted the unwelcome attention of insurgents who tried to blow him up with RPGs. Forget the fictionalised works of Andy McNab, Tom Clancy and Chris Ryan: this is the real deal. This is a firsthand account of the men who decide to pay the ultimate price, but be warned, this tells the real story that the Government does not want you to know.

A Preview for this title is currently not available.
More Books By Lewis Steiner
View All

Report of Lewis H. Steiner: Inspector of the Sanitary Commission, Containing a Diary Kept During the Rebel Occupation of Frederick, MD., and an Account of the Operations of the U.S. Sanitary Commission During the Campaign in Maryland, September, 1862
Lewis Henry Steiner
Hardback , Nov '18
RRP: $80.18 $72.16