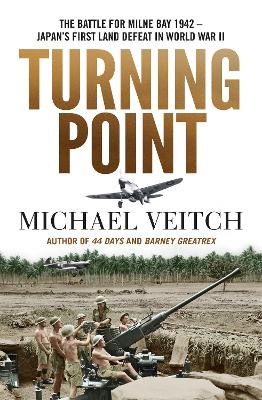 The Battle for Milne Bay - Japan's first defeat on land in the Second World War - was a defining moment in the evolution of the indomitable Australian fighting spirit. For the men of the AIF, the militia and the RAAF, it was the turning point in the Pacific, and their finest - though now largely forgotten - hour. Forgotten, until now.In August 1942, Japan's forces were unstoppable. Having conquered vast swathes of south-east Asia - Malaya, Singapore, the Dutch East Indies - and now invading New Guinea, many feared the Empire of the Rising Sun stood poised to knock down Australia's northern door.But first they needed Port Moresby. In the still of an August night, Japanese marines sailed quietly into Milne Bay, a long, malaria-ridden dead end at the far eastern tip of Papua, to unleash an audacious pincer movement. Unbeknown to them, however, a secret airstrip had been carved out of a coconut plantation by US Engineers, and a garrison of Australian troops had been established, supported by two locally based squadrons of RAAF Kittyhawks, including the men of the famed 75 Squadron. The scene was set for one of the most decisive and vicious battles of the war.For ten days and nights Australia's soldiers and airmen fought the elite of Japan's forces along a sodden jungle track, and forced them back step by muddy, bloody step.In Turning Point, bestselling author Michael Veitch brings to life the incredible exploits and tragic sacrifices of these Australian heroes.

A Preview for this title is currently not available.
More Books By Michael Veitch
View All