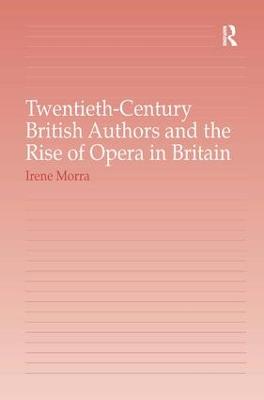 Twentieth-Century British Authors and the Rise of Opera in Britain

This book is the first to examine in depth the contributions of major British authors such as W. H. Auden and E. M. Forster, as critics and librettists, to the rise of British opera in the twentieth century. The perceived literary values of British authors, as much as the musical innovations of British composers, informed the aesthetic development of British opera. Indeed, British opera emerged as a simultaneously literary and musical project. Too often, operatic adaptations are compared superficially to their original sources. This is a particular problem for British opera, which has become increasingly defined artistically by the literary sophistication of its narrative sources. The resulting collaborations between literary figures and composers have crucial implications for the development of both opera and literature. Twentieth-Century British Authors and the Rise of Opera in Britain reveals the importance of this literary involvement in operatic adaptation to literature and literary studies, to music and musicology, and to cultural and theoretical studies.

Buy Twentieth-Century British Authors and the Rise of Opera in Britain by Irene Morra from Australia's Online Independent Bookstore, BooksDirect.

A Preview for this title is currently not available.
More Books By Irene Morra
View All