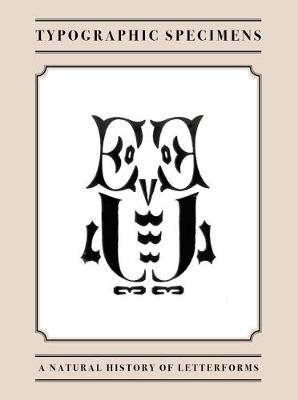 A Natural History of Letterforms

In 1831, Reverend Jackson Whitehead served as chaplain aboard the HMS Pica, which accompanied the Beagle on its second survey expedition. Whitehead was a keen collector of fauna as well as a typography enthusiast. Upon realising that the majority of both ships' crews were either committed atheists or budding evolutionists, Whitehead embarked on creating a whole series of natural history specimens made up out of typographical characters. Only recently, after the restoration of Whitehead's ancestral home, has the manuscript of his work come to light. Edited by artist, A.W. Bainbridge, Typographic Specimens presents his menagerie of beasts, fish, fowl and invertebrates, all created from traditional typefaces, numerals and punctuation marks. AUTHOR: A.W. Bainbridge is an artist, designer and educator. His natural talent for drawing led to him studying art, eventually specializing in Graphic Design at Preston Polytechnic. After graduating in 1991 he practised for the best part of a decade with The Chase Creative Consultants, one of the UK's leading design agencies. He returned to Higher Education in 1999 and is currently Senior Lecturer in Graphic Communications and Creative Thinking at The University of Central Lancashire. Lecturing aside, he has a penchant for words and type, and is an inveterate collector, connector and documenter, and a serial dry stone waller. SELLING POINTS: . Wonderfully inventive illustrations . All images accompanied by brief, witty descriptions . Great gift book for art and graphic design-lovers