Law and Politics in the South China Sea

The United Nations Convention on the Law of the Sea (UNCLOS) offers a legal framework for the sustainable development of the oceans and their natural resources. However, recently there have been calls to amend the Convention due to some ambiguous provisions which are unable to address a variety of contemporary maritime issues.

This book evaluates the applicability and effectiveness of UNCLOS as a settlement mechanism for addressing ocean disputes. The book's central focus is on the South China Sea (SCS) dispute, one of the most complex and challenging ocean-related conflicts in the world. The book examines the ways in which an emphasis on sovereignty, threats to maritime security and overlapping maritime claims caused by the newly established maritime regimes authorized by UNCLOS are all contributing factors to the SCS dispute. The book considers the internal coherence of the Law of the Sea Convention regime and its dispute settlement procedures. It looks at participation in the UNCLOS negotiations, maritime legislation, and the dispute settlement practice of relevant States party to the SCS dispute. The author goes on to explore the relationship between UNCLOS and the regimes and institutions in the SCS, particularly in regard to issues of maritime security, marine environment protection, joint development of oil and gas and general political interaction. The author proposes practical mechanisms to resolve the dispute whilst also offering a final judgement on the effectiveness of UNCLOS for settling disputes. UNCLOS and Ocean Dispute Settlement will be of particular interest to academics, students and policy makers of international, shipping and maritime law as well as being of interest to academics and students in the field of international relations.

Other Editions - UNCLOS and Ocean Dispute Settlement by Nong Hong 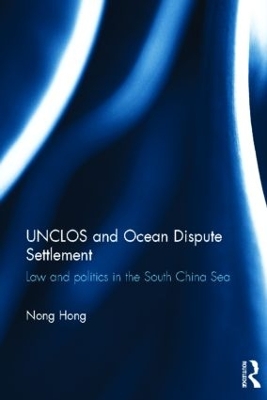 A Preview for this title is currently not available.
More Books By Nong Hong
View All

Recent Developments in the South China Sea Dispute: The Prospect of a Joint Development Regime
Wu Shicun
Hardback , May '14
RRP: $263.00 $260.37