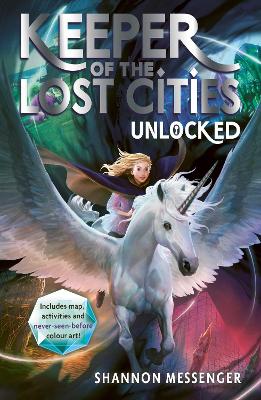 Book 8.5 in the New York Times bestselling Keeper of the Lost Cities series delivers what fans have been begging for! Told in an exciting new way, the saga continues with plenty of huge reveals and shocking new twists - plus a complete series guide with beautiful colour and black-and-white illustrations and other awesome bonuses, never seen before in the UK!

In this extra special installment of the Keeper of the Lost Cities series, the story picks up right from Legacy's particularly devastating cliffhanger. But chapters alternate between Sophie and Keefe's perspectives to give readers deeper insights into both beloved characters. New powers will be discovered. Hard truths from the past will come to light. And all of your favorite characters will find themselves tested in ways they never imagined.

And that's not all!

Unlocked also includes a comprehensive guide to the world of the Lost Cities, featuring new character and world details that have never been revealed before - plus fun bonuses like Keeper-themed recipes, a detailed map of the Lost Cities, gorgeous full-color illustrations, and so much more!