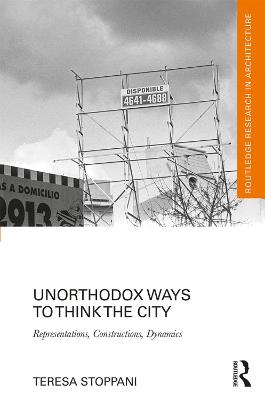 Unorthodox Ways to Think the City

Description - Unorthodox Ways to Think the City by Teresa Stoppani

The paradigm and philosophy, the island and the city, the map and representation, the model and making and the questioning of form performed by dust, are explored beyond their definition, as processes that differently make space between architecture and the city and are proposed as unorthodox analytic techniques to decipher contemporary spatial complexity.

The book analyses how these 'figures' have been employed at different times and in different creative disciplines, beyond architecture and in relation to changing notions of space, and traces the role that they have played in the shift towards the dynamic that has taken place in contemporary theory and design research. What emerges is the idea of an 'architecture of the city' that is not only physical but is largely defined by the way in which its physical spaces are regulated, lived and perceived, but also imagined and projected.

Other Editions - Unorthodox Ways to Think the City by Teresa Stoppani A Preview for this title is currently not available.
More Books By Teresa Stoppani
View All